Philadelphia Squatters Rights and How to Navigate Them

In the last few years Philadelphia squatters rights have played tug of war at City Hall, so it’s no surprise why many are confused. Specifically considering everything that happens in City Hall is usually quite clear (tongue, meet cheek).

Fortunately, these changes have perks if you’re a Philadelphia landlord or tenant.

Whether you’re here to better understand these changes or are just reading up on this subject for the first time, I promise your time will be well spent. You know, because you’re spending it with me.

A young woman stumbling along shimmies her way through the back door of an abandoned house to stay the night. The next night she does the same and continues for weeks after that until she’s made herself comfortable.

Too easy? You would think….

Okay, how about, a businessman who is in town for a few months rents an apartment. He signs a lease, pays a security deposit and 1st month’s rent upon move-in, but a few weeks later, a man is at his door claiming he has to move out.

The law may not be able to cover it all, but there are some straightforward situations between these three terms, and specific ways to deal with each:

To best determine how to evict a squatter in Philadelphia, let’s get into more detail on how to ID them!

A neighbor calls you because someone is breaking through your window. Clear, cut and dry, trespassing; call the police.

You purchase a foreclosed home, but the previous owner won’t leave – squatter. A previous tenant’s ex who wasn’t on the lease won’t move out – squatter. A random person moves in and refuses to leave, come on, together now – 1, 2, 3: SQUATTER!

Here are some of the criteria which may sway law enforcement or a judge to classify your uninvited guest as a Philadelphia squatter instead of a trespasser:

Now, time for the disclaimer. Each jurisdiction and judge may have different criteria to identify who falls under Philadelphia squatters rights. There is also some ambiguity if you purchase a property knowing they are squatters, so in that case, it wouldn’t hurt to consult with an attorney first.

One important distinction is that trespassing is a criminal offense while squatting is handled by the civil courts. This is critical because, while you should steer away from taking either matter into your own hands, if you unlawfully remove a squatter, you may face legal consequences.

This is referred to as an improper or self-help eviction, as defined in Section 9-1602 (i.e. changing the locks, cutting off utilities, threatening the tenant, using force, removing their belongings, etc.). So even though the first rule of fight club is you do not talk about fight club, leave the crew at Lou’s Tavern. 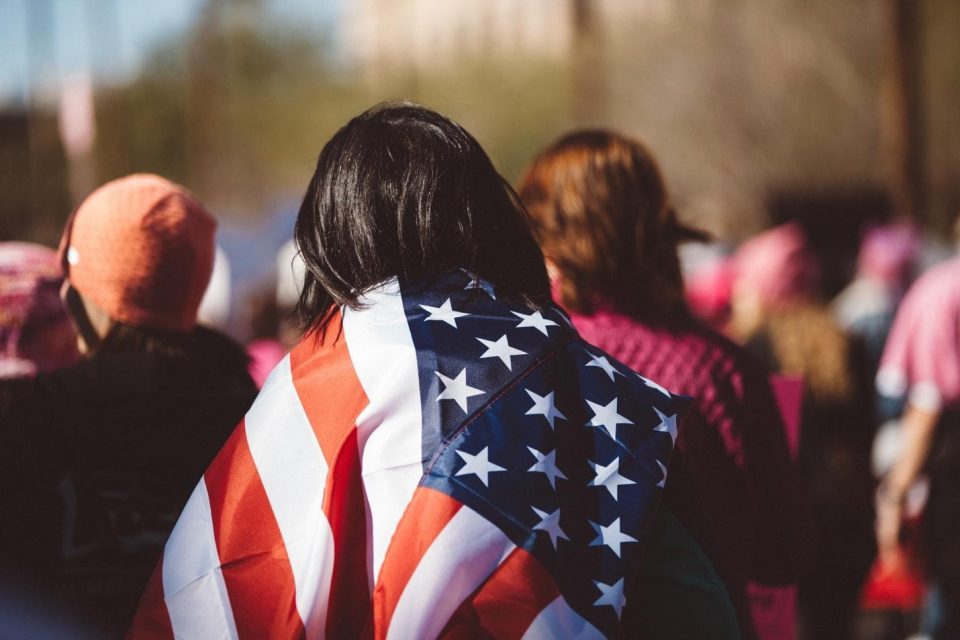 Keep in mind, while you must abide by Philadelphia squatters rights, the much-feared ultimate takeover named adverse possession is rare.

Sure, a squatter may show falsified paperwork or documents to law enforcement to try to prove possession, which is illegal, but the process for adverse possession is more stringent than that. 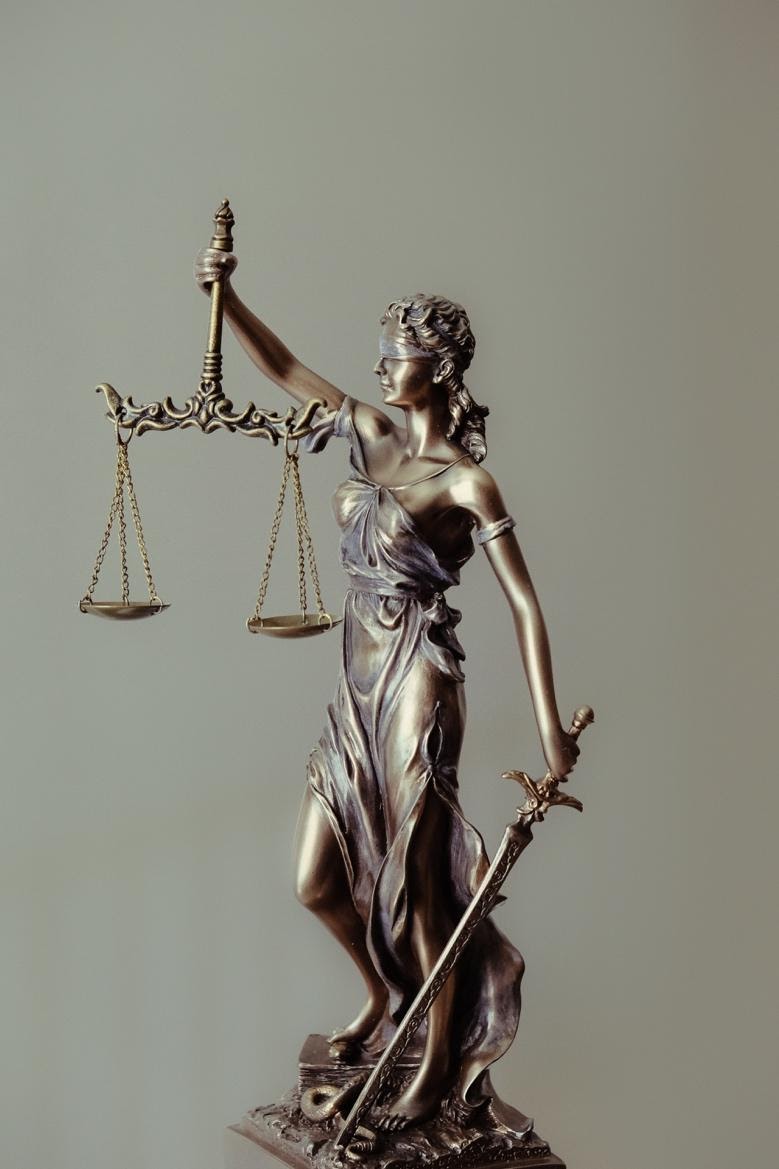 According to Philadelphia squatter rights, to qualify for adverse possession a squatter must:

You may be wondering if Philadelphia squatters must pay property taxes to claim adverse possession since some states do require this. Short answer: no. Longer answer: no, but it will help their case if they do.

If you’ve been a property owner for some time in Philly, you may know that squatters have been a concern for many. If not and you’d like to know more, continue reading.

However, in 2018 the Philadelphia City Council passed a law to help property owners from predatory squatters.

The new law established a legal procedure to expedite the removal of Philadelphia squatters. Whereas previously squatters went through the landlord-tenant eviction process, which is costly and could take months, the new procedure through the Court of Common Pleas is intended to reduce costs and expedite the process to 30 days.

Although still a civil case, in addition to new fines, this law also added criminal consequences for squatters. However, I suspect this was used as a bargaining chip on later negotiations to pass an amendment in late 2018.

Why you ask? In a nutshell, some were concerned the original bill was too ambiguous, leaving victims of scams, abuse, and harassment vulnerable. So, the amendment added protections for these victims, and also increased penalties from $300 per day to $1,000 for first-time offenders and $2,000 for repeat offenders, while keeping the potential for a 90-days jail sentence.

Remember our “Trespasser, Squatter, or Tenant?” game? This is why those examples aren’t as straightforward as they may have seemed. While that stumbling young woman would be the model definition of a squatter, if she was squatting to protect herself from living with abuse or harassment, this law would protect her.

As it would help the businessman who was scammed by the fake landlord. The amendment includes additional consequences and protections in this situation, by adding fines of up to $2,000 or imprisonment of up to 90 days and gives the victims the chance to recover damages.

These victims would not face the new penalties this law created. However, they would still need to leave the property within 15 days.

Essentially the new laws streamlined how to evict squatters in Philadelphia, empowers police to investigate the ambiguities between a trespasser or a squatter, and added consequences to deter squatting while aiming to protect vulnerable citizens. 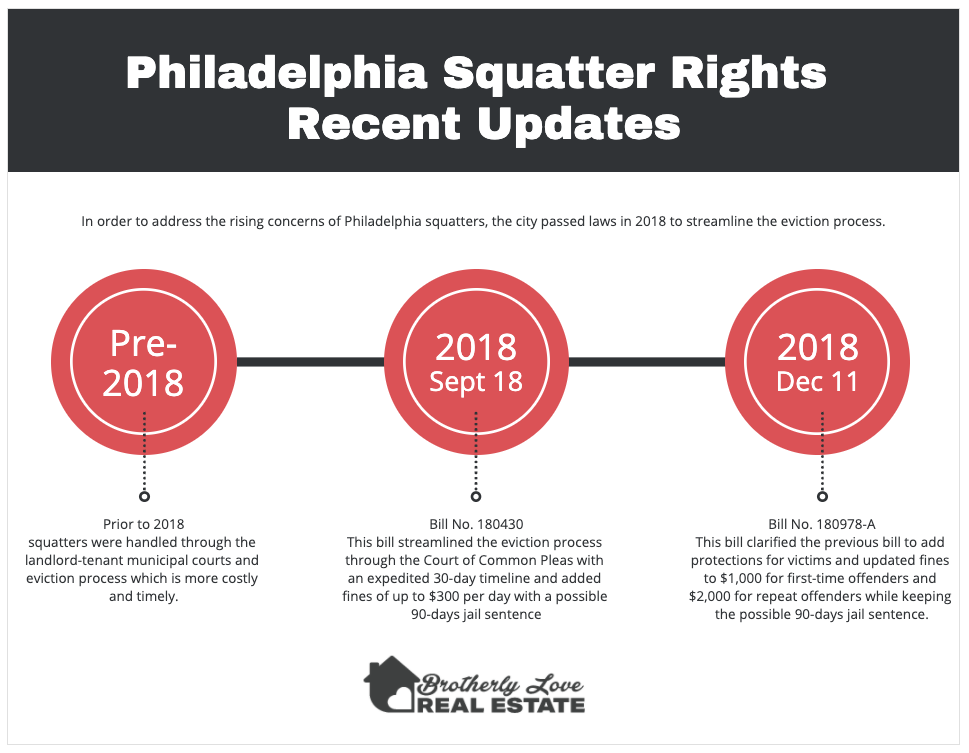 Of course, it’s always good to have the law on your side, but there are additional things you may do to help protect yourself against Philadelphia squatters. 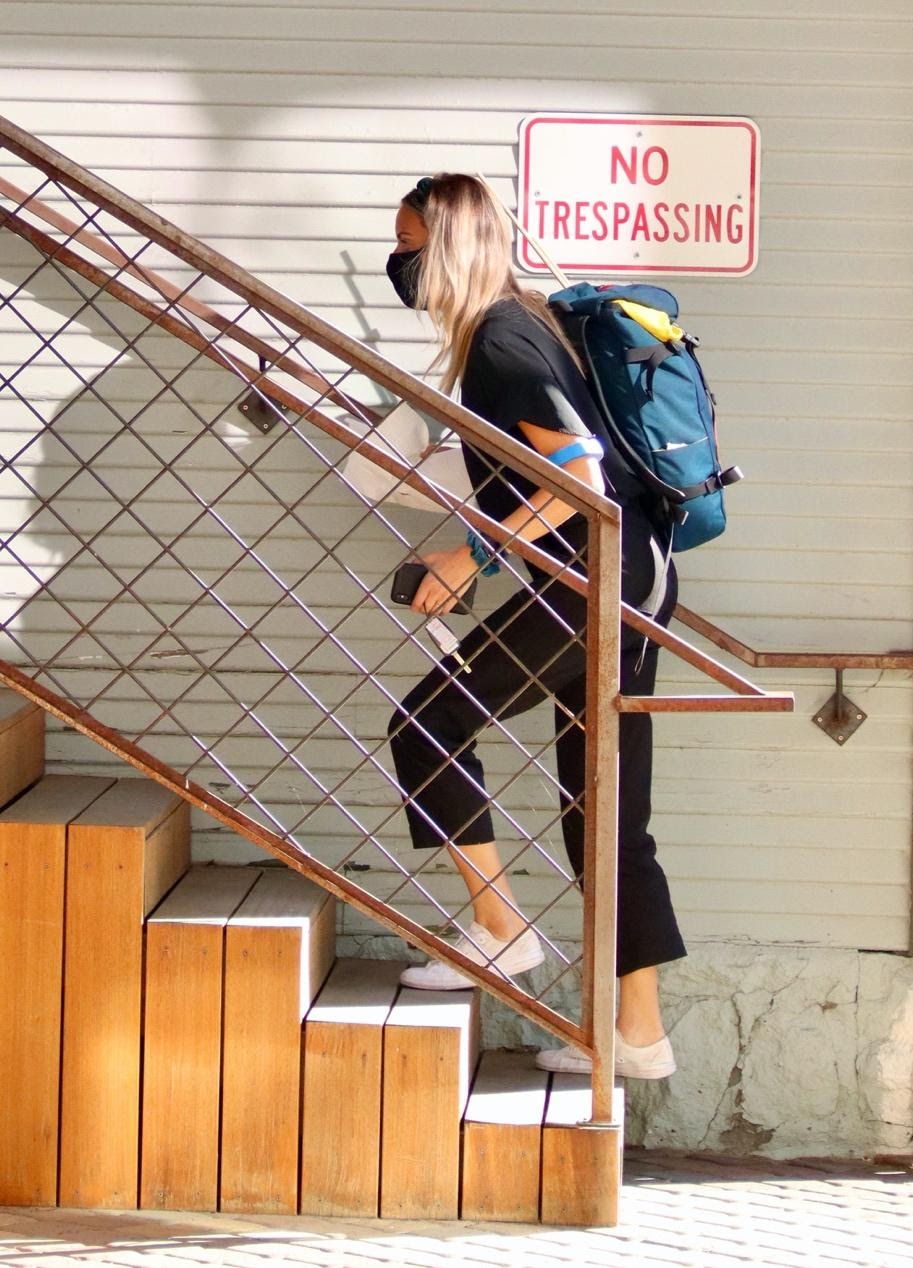 How to Evict a Squatter in Philadelphia

Sorry to hear you’re dealing with Philadelphia squatters, but don’t fret, I’m here for you.

Thanks to the new laws, the process on how to evict a squatter in Philadelphia is much less complicated. So, let’s go through the steps.

STEP 1: Document EVERYTHING!! This is an overarching step on anything you do as a landlord, but I included it as #1 here because it’s extra important to keep records when dealing with any type of eviction.

STEP 2: Inform the police and the Licenses and Inspections Department immediately. Now that better laws are in place, law enforcement and city officials are in a better position to determine if an unwanted guest is a trespasser or a squatter. Even if the person is deemed a squatter, it further helps you (and supports your documentation!) to have these reports on record.

Pro Tip: Have proof of ownership ready for law enforcement when they arrive at the property.

STEP 3: If law enforcement will not remove an unauthorized occupant because of Philadelphia squatter rights, file a Complaint for Ejectment. This is a pretty straightforward process so, shy of any complications, you may do so without an attorney. The process is explained pretty thoroughly in the Ejectment Package by the Office of Judicial Records.

Just one important note on this process, after filing the Complaint for Ejectment be sure to file the affidavit with both the city and law enforcement. This gives you the right to request an expedited hearing date with the Court of Common Pleas and permits the police to launch an investigation.

STEP 4: If the squatter has left any property after they have vacated, try to notify them as best as possible. You may need to store the property for up to 30 days, after which time, feel free to use it as target practice. Jokes, a window into the soul.

Nonetheless, I hope this helps clear things up a bit. If you continue to have issues, contact us and we’ll be happy to see if we can help.

While this journey may have begun with jokes about City Hall, at the end of the day, the new laws have improved how to evict squatters in Philadelphia and have made it easier to navigate Philadelphia squatter rights. These new laws combined with preventative measures and the knowledge you’ve gained by being here with me today will leave you better prepared to deal with Philadelphia squatters.

Disclaimer: Brotherly Love Real Estate is not an attorney or law office. This guide has information gathered from public online sources. Please consult a real estate attorney before acting on anything concerning a Philadelphia eviction.

Do you need to sell a house with squatters?